Batman v Superman: Dawn of Justice is not the greatest superhero film, that honor still belongs to Logan, but through a series of odd choices and behind the scenes happenstance, it became the perfect comic book film. Now I know a lot of you probably hated this film, so please bear with me while I explain. Also, I’m referring to the Ultimate Edition (the extended cut) throughout. It restores a lot of character development, and I absolutely agree that the theatrical edition is a waste of time.

The film opens on the traditional Batman origin scene, but that’s the only origin we get throughout the film, which is kind of odd for a film that also features Superman, and introduces Wonder Woman and Lex Luthor. Despite this, a lot of time has passed between that origin and the Batman in the film. It’s never explained why Wayne Manor is in ruins, or why all of the Bat-vehicles have two seats while Robin’s costume sits in memorial with “Haha, joke’s on you, Batman” scrawled on it. It’s safe to say that, despite seeing an origin for Batman, we are missing some critical backstory.

With Ben Affleck done as Batman, it’s unlikely we’ll ever see this backstory, or any further story featuring this Batman after Justice League for that matter. Similarly, though this is a sequel for Man of Steel, watching that film is definitely not a requirement. The ending of Man of Steel overlaps the beginning of Batman v Superman, this time told from Bruce Wayne’s point of view, as embedded below. Really, all you need to know is that Superman is fighting someone who’s probably just as strong as him, and people are dying because of it.

And, that’s kind of the point here, there isn’t much effort given to the backstories of these characters, and it’s not really needed either. Now if you say that sounds terrible for a film, you’re right, but this is exactly how we read comics! People who are drawn in suddenly by issue 37 on the shelves don’t rush out to buy and read issues 1 – 36, they just start with 37. “Who’s this character? I don’t know, but she looks important. Oh cool, she is important!” That’s what reading new comics is like, and this film accidentally invokes that!

Now we know that Ben Affleck is out as Batman, but it looks like Henry Cavill may be out as Superman too, which puts the whole franchise in jeopardy, so there may not be an ending, but that’s just like reading comics too! With the exception of random continuity reboots, these characters’ stories don’t end, you just stop reading them. So again, Batman v Superman has accidentally invoked the experience of reading comics.

Batman v Superman is not a great film, but by having little-to-no character backstories, and quite possibly no future prospects, it has perfectly invoked the experience of reading a comic book. In this way, it is quite possibly the perfect comic book film.

He had not turned his back on us. He stands in the sky … faith rewarded. He is returned … and – dear God. The threat of Armageddon hasn’t ended. It’s just begun …

Kingdom Come, a DC Elseworlds masterpiece by writer Mark Waid and artist Alex Ross, is the best graphic novel ever produced by a major comic publisher. A philosophical tale of Armageddon in the DC universe, Kingdom Come is filled with biblical parallels which cast our heroes and antiheroes into haunting roles that we are all too familiar with.

The world of Kingdom Come begins several years after the mainstream continuity of the DC universe. An aged and maddened Joker rampages through the Daily Planet, claiming the lives of ninety-two men and one woman. Magog, a modern-age antihero enraged by Superman’s inaction, arrives at the scene of the massacre and ends the Joker’s life in front of a stunned Superman. The resulting controversy leads the people of Metropolis to choose Magog as the man who would best safeguard their future. They choose the man who would kill over the man who wouldn’t, and this choice will cost them dearly.

Disheartened by the changing times, and unable to change with them, Superman made a decision to turn his back on humanity and live in exile in his Fortress of Solitude. Following Superman’s example, many of the Earth’s greatest heroes similarly retired into exile. In their absence, a new breed of antiheroes, inspired by Magog and completely devoid of any concern for human safety, emerged to conquer anyone who who would oppose their own definition of righteousness. These events set the stage for Kingdom Come.

Ten years later, a relentless attack by Magog and his Justice Battalion on a weary and beaten Parasite leads to a cataclysmic nuclear explosion which destroys the entire state of Kansas. In response to the catastrophe, the safe coexistence between humans and meta-humans is questioned by those with enough authority and firepower to end it, and a derelict hero returns to set right the wrongs that had been committed in his absence. The war has begun, and Armageddon is not far behind. 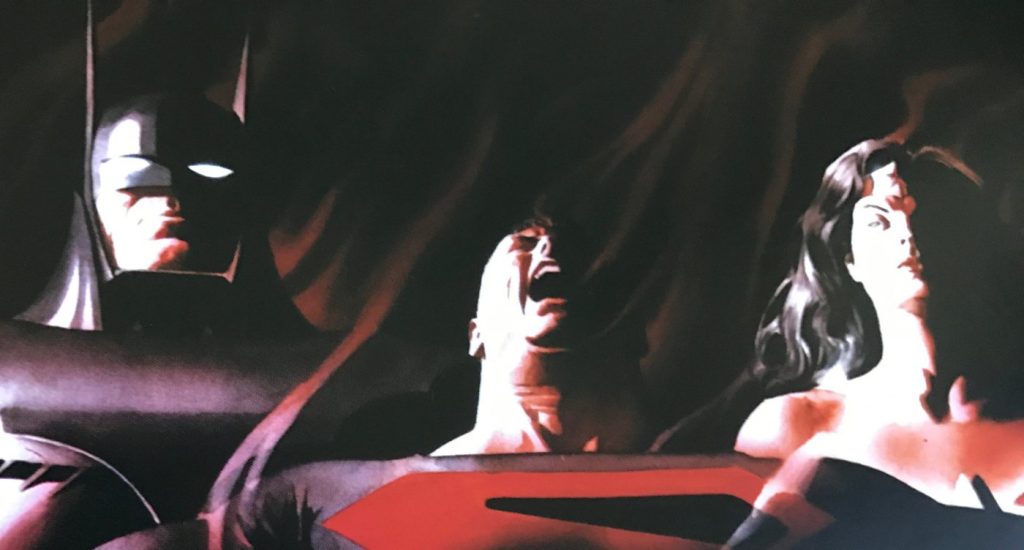 Kingdom Come‘s haunting and emotional story is told through the eyes of Norman McCay, a Pastor who begins to lose his faith and feels as if he has betrayed his congregation, as he can find nothing to comfort them in this time of crisis. He is guided through time and space by the Spector to bear witness to the events that will lead to Armageddon and to judge those responsible. The weight of this responsibility causes Norman to question the true meanings of humanity, faith, and evil.

Mark Waid’s story offers an imaginative look into the future of the DC universe and effortlessly blends it with the book of Revelation. Biblical scripture from Revelation, foretold by Norman McCay and his dying friend, Wesley Dodds (the former Sandman), is masterfully woven into the story and paints an eerie future for our childhood heroes.

Alex Ross adds his powerful imagination to the story by beautifully illustrating his vision of the future heroes. Ross is legendary for the quality of his artwork, his use of paints, his imaginative vision, and his attention to detail. Kingdom Come is his best work.

Alex Ross’ beautiful artwork fills all two-hundred and twelve pages of this novel, masterfully illustrating every emotion, every struggle, and every sacrifice, while Mark Waid’s story is gripping, passionate, and powerful.

Kingdom Come is a story about what it truly means to be human, and the sacrifices we make in order to achieve what is right. It can easily reach a common ground with any reader, and reach into the soul of even those who perceive themselves to be soul-less.

This review was previously published on Splash Panel on July 6, 2006.