You are heroes. More than me. Maybe one day you’ll look around and you’ll see the world like I have to, and you’ll know I did the right thing. Or at least you’ll understand why I did it.

Secret War, a masterpiece by writer Brian Michael Bendis and artist Gabriele Dell’Otto, is the best graphic novel ever produced by Marvel Comics. Blinded by diplomacy and arrogance, the United States government refuses to acknowledge the imminent danger as a foreign threat continues to grow. How far will one man go to defend his country? The decisions made, and their consequences, will forever change one of Marvel’s most iconic legends.

Luke Cage and Jessica Jones return home to find a strange woman standing by the window. Suddenly, Cage’s apartment explodes in a bright, white light. Cage takes the brunt of the explosion, sparing his wife-to-be. He is rushed to the hospital where he lapses into a coma and is diagnosed with severe trauma to his internal organs. He needs emergency surgery, but the doctors have no way of breaking his steel-hard skin. Cage’s fate is now in the hands of God, and the question on top of everyone’s list is, “Why?”

When Nick Fury, director of S.H.I.E.L.D. (Strategic Hazard Intervention, Espionage and Logistics Directorate), arrives, he is the first to be accused by Jones. Her question, pointedly stated, “Do you know who did this to him? I mean, why are you here? See what I’m saying?” 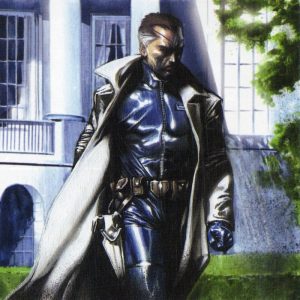 One year ago, Fury noticed an increase in the quality and power of technology held by some of the world’s deadliest villains, and he was shocked to learn that the funding for that technology came from Latveria, a new Latveria that had supposedly rehabilitated itself in the eyes of the world after the death of its former dictator, Dr. Victor Von Doom. Despite clear evidence of the threat, the President refused to accept the reality of the situation. After Doom’s death, the United States had sent several million dollars in aid to Latveria and even arranged the election of the country’s current Prime Minister, Lucia Von Bardas. The President assured Fury that, if there were a problem, it would be dealt with diplomatically. To Fury, this was unacceptable. He had presented clear evidence that the United States was in danger, and the federal government has refused to acknowledge it. For Fury, there was no choice between diplomacy and the safety of innocent people. He couldn’t let this happen.

Fury rapidly assembled a team of the world’s greatest, yet most misunderstood heroes: Luke Cage, Daredevil, Spider-Man, Captain America, Wolverine, Black Widow, and fellow S.H.I.E.L.D. agent Daisy Johnson. With no knowledge of the mission at hand, they departed under false identities and rendezvoused with Fury to prepare for the overthrow of Latveria’s government. 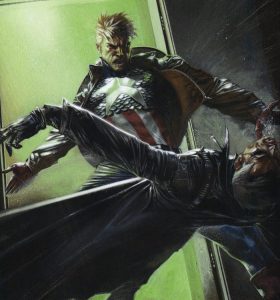 In the present, Peter Parker (Spider-Man) has been having nightmares of himself and other heroes fighting hordes of technology-powered soldiers. He joins Matt Murdock (Daredevil) on a trip to see Cage at the hospital when they are suddenly attacked by two technology-powered villains. Meanwhile, Steve Rogers (Captain America) barges into Cage’s hospital room after being attacked in front of his home. He is shocked to see what has happened to his friend, and immediately lashes out at Fury screaming, “Damn you for what you did to us!”

Something happened on that mission one year ago. Something that only Fury and Rogers remember. And those who were harmed during that operation, those who lost the war, are back for revenge. What was Fury willing to do to protect his country, and will he be able to face the consequences of his actions? Does the end ever justify the means?

Brian Michael Bendis’ story is a dark tale packed with mystery, drama, and action. The dark, emotional, and character-driven drama of Secret War has led it to be agreeably titled as, “The Darkest Chapter in Marvel Universe History”.

Gabriele Dell’Otto’s art is beautifully painted on every page. It brings the emotion of every scene to life and captures the darkness and characterization of Bendis’ story in a way that I have not seen since Alex Ross’ work on Kingdom Come.

Secret War is a must-have for any fan of great artwork and a great story. It is a tale of right and wrong, of sacrifice, and of consequence, the ramifications of which will be felt for years to come.

This review was previously published on Splash Panel on October 22, 2006.