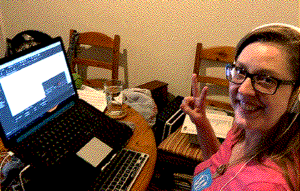 Earlier this month, Sarah spent 8 straight hours composing the soundtrack for Shady Oaks Takedown, a senior center martial arts comedy, which was completed in just 48 hours. This short film marks the first time Sarah’s music was heard in a real movie theater, and now it is moving on to final voting for the Audience Award this Friday!

You can own this senior center martial arts comedy with an 80’s vibe soundtrack for just $3 and enjoy this new historic moment in Sarah’s rapidly growing composition career!

For more details on the how the soundtrack came together, check out the interview between Sarah and director Andrew Menjivar.