All your life you did the right thing, always putting others before yourself. This is your reward.

Reborn is an imaginative look at the afterlife from writer Mark Millar and artist Greg Capullo. We’re introduced to our hero Bonnie Black as she passes away from a stroke, only to be reborn in the afterlife, younger and apparently the prophetic savior of everyone who had lead a good life. Bonnie is joined by her battle-hardened father and war-ready childhood dog on a quest to stop the forces of darkness. 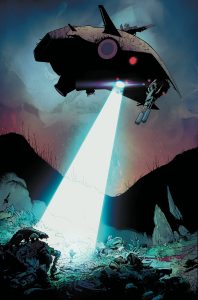 We’re all familiar in some way with stories of traditional heaven and hell style afterlives, and while Reborn certainly doesn’t deviate from that style, it refreshes it with a vibrant fantasy world and an over-arching examination of life, death, what we leave behind, and what we bring with us. My only complaint is that Millar and Capullo have constructed such a vibrant fantasy world that it seems impossible to cover in this first volume, so it’s filled with imaginative visuals that are accompanied by little to no explanation. I preferred to fill the gaps in myself, as Bonnie’s journey of discovery and acceptance makes it hard not to wonder what we’d do in the same situation.

Reborn is just one volume so far, but according to Millar, there is a strong possibility of four more volumes, a series of novels, and a television series. The first volume has a solid ending and can definitely stand on its own, but I’m excited to see the rest of this world that Millar and Capullo have built.

© Copyright James Huff and MacManX.com, 2004 – 2022. Unauthorized use and/or duplication of this material without express and written permission from this site’s author and/or owner is strictly prohibited. Excerpts and links may be used, provided that full and clear credit is given to James Huff and MacManX.com with appropriate and specific direction to the original content. Privacy Policy