I’m your creator and designer, but that does not make me your family. You have no real family. You aren’t alive. You do understand that, don’t you?

Descender is a beautiful series from writer Jeff Lemire and artist Dustin Nguyen, and in many ways, a coming of age tale both for our young protagonist and civilization itself. Set at some point in the very distant future, when many species have colonized the stars and mostly work together, the story follows a young robot who may have an ancestral connection to the robots who suddenly appeared and wiped out hundreds of millions of lives before vanishing just ten years prior. 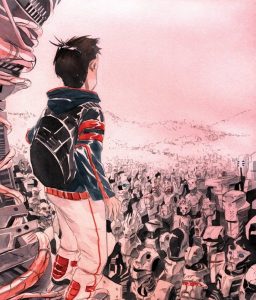 The writing is engaging and reminiscent of many of today’s great provocative TV series, while the art is captivating and reminiscent of finely detailed water colors. Throughout the story, you’ll find yourself growing attached to the young robot who seems set on a path to outgrow his programming, while remaining constantly aware of the terrible toll the rest of the galaxy paid for that growth. The story is not as heavy-handed as it seems, rather it is presented with a balance that is delicately maintained throughout, accompanied by an eclectic cast and spread across an energetic plot.

Descender has been running as a monthly series since March of 2015, with three volumes already published and a fourth on the way. You definitely won’t regret diving in, and I’m sure you’ll want to stick around to see how it ends. I certainly do.