The Berserkers charge like demons from the depths of hell. Plunging from the cliff, or falling prey to the Dragon Men? Ghost makes his choice. 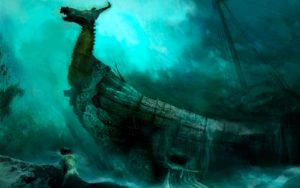 I seldom read and rarely enjoy graphic novel adaptations of movies, but Pathfinder is a visual feast from artist Christopher Shy and writer Laeta Kalogridis that is far superior to the film itself.

When director Marcus Nispel contacted artist Christopher Shy and expressed his interest in a film depicting a war between Vikings and Native Americans, Shy began to produce seemingly endless pages of concept art. So much concept art in fact, that they used all of it to produce the graphic novel adaptation.

The tale itself, with the exception of the overall concept of a war between Vikings and Native Americans, is unfortunately quite plain. A shipwrecked Viking longboat is attacked by the local tribe who slaughter everyone, except for the young son of their leader. The boy is raised by the tribe and eventually emerges as an unlikely hero when the Vikings return.

The graphic novel itself features Christopher Shy’s beautifully painted art in every single panel, and with an average of seven words per page, one could say that the story lets the art stand on its own. As the story is told from the tribe’s point of view, Shy made a great effort to realistically portray the Native Americans while also portraying the Vikings as almost faceless eight foot tall monsters wielding swords and axes the size of an average person.

The characters are detailed and imaginative, the scenery is vast, and the color palate and shading perfectly accent the mood in each panel. With each page being worthy of framing, this is a graphic novel that you must have in your collection.

This review was previously published on Splash Panel on September 9, 2010.