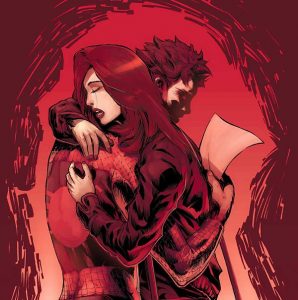 Spider-Man: The Other is not your typical comic book death and rebirth story. It’s an immense tale worthy of most high-caliber television series. Woven by writers Peter David, Reginald Hudlin, and J. Michael Straczynski, and illustrated by Mike Wieringo, Pat Lee, and Mike Deodato, Jr., The Other is not without its faults, but it is an in-depth experience not to be missed by any Spider-Man fan.

To be honest, it took three reads before I began to appreciate this graphic novel. Maybe it was the art, which (with the exception of Pat Lee’s pages) really doesn’t stand out. Maybe it was the length, which can seem quite long at first, but merely serves to draw you further into this intricate story. Maybe it was the villain, who seemed ridiculous at first, but was really as close as you could get to an “anti-Spider-Man”. Or, maybe it’s because I know that Marvel can do far worse than kill their star character.

The Other begins with Peter Parker experiencing random blackouts, dizzy spells, loss of his powers, and prophetic dreams. After a failed attempt to thwart a bank robbery results in Spider-Man being shot by the thief, Parker discovers that he is slowly dying due to a radiation-based infectious disease, possibly related to the spider bite which gave him his unique powers years ago.

The following requires a bit of back story. You may have thought that Parker gained his powers after being accidentally bitten by a radioactive spider, but you’re wrong. Author J. Michael Straczynski took it upon himself to give Spider-Man an origin of more mythic proportions. According to Straczynski’s origin, Parker always had a connection to a totemic spider spirit. The irradiated spider did not accidentally bite Parker, but chose to pass on its powers to him before dying. At that moment, Peter Parker became a living spider totem, a “bridge” between man and beast, able to exhibit the properties of both. 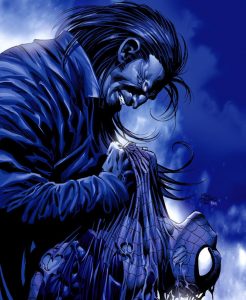 After traveling with his family for perhaps the last time, Parker comes face-to-face with Morlun. Morlun is an ancient being who feeds off of totems. He is essentially Spider-Man’s worst nightmare, someone to avoid at all costs. Morlun draws strength from any physical contact with a totem, which includes both punching and being punched. Parker and Morlun fight through the streets of New York, but no matter what Parker does, Morlun simply grows stronger. In the end, Parker collapses, but is saved by the police, forcing Morlun to leave (he apparently wants to feed in private, but this is never explained).

In the hospital, Parker’s face has been destroyed beyond recognition, and the doctors have no hope of saving his life. Morlun arrives to finish the job, but Parker awakes with spider-like eyes, sharp teeth, and stingers protruding from his wrists. With his last bit of strength, he kills Morlun and says farewell to his wife.

Days later, the apparently deceased Parker sheds his skin and cocoons himself to the underside of the Brooklyn Bridge. As he begins to dream, a voice scorns him for only being a man and failing to embrace the spider. Morlun had killed the man, but the spider awoke to kill Morlun. The voice offers to bring Parker back to life, but only if he accepts both the man and the spider equally. He accepts, is reborn in an outwardly human form, and returns to his family.

After further investigation, Tony Stark is surprised to learn that all of Parker’s wounds have healed, even the tonsils that he lost as a child have returned. Now embracing his spider side, Parker is granted new abilities. He has night vision, can feel vibrations through his webbing, can adhere objects to his back, and has “stingers” which can protrude from his wrists.

Parker died and was reborn as a more accurate combination of both man and spider, though he does question the stingers, which spiders don’t have. Parker, still more man than spider, encounters “The Other”, a totem who is more spider than man. “The Other” warns Parker that other mythological forces feel that he should have died. It then retreats and is now cocooned within a church.

The Other is a very entertaining read, and certainly expands on Spider-Man’s mythological origins. Unfortunately, with the events of the later One More Day and Brand New Day, over twenty years of Parker’s life have been selectively removed from continuity due to a deal that he made with the devil (no, I’m not kidding). As a result, the validity of both The Other and Spider-Man’s mythological origins have not been addressed and are now in doubt. Regardless of its value to overall continuity, The Other is worth reading.

This review was previously published on Splash Panel on March 19, 2010.