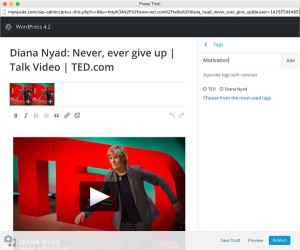 WordPress 4.2 has been released! This release introduces a fully redesigned Press This, easier theme switching in the Customizer, support for new embeds from Tumblr and Kickstarter, expanded support for native Chinese, Japanese, and Korean characters, musical and mathematical symbols, hieroglyphs, and Emoji. Of course, those are just the highlights. There’s much more to WordPress 4.2.

283 volunteers contributed to this release, lead by Drew Jaynes. At the time of writing this, WordPress 4.2 has been out for less than 4 hours and has already been downloaded 452,492 times!