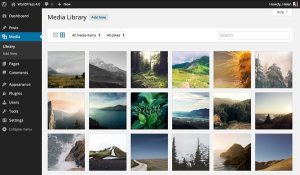 WordPress 4.0 has been released! This release brings with it a stunning new gallery-like grid view for your media library, more streamlined ways of interacting with your media, a new editor which displays embeds inline and expands as you write with a toolbar which follows as you scroll down, a much more visual plugin directory, and hundreds of other behind the scenes fixes and improvements.

If you aren’t a fan of the new Media Library grid view, don’t worry, you can switch back to the old list view via a toggle near the top-left of the Media Library.

275 volunteers contributed to this release, led by Helen Hou-Sandí. At the time of writing this, WordPress 4.0 has been out for only 2 hours and has already been downloaded 104,571 times!

If you’re a WordPress.com blogger, you have nothing to worry about, as you’ve technically been running WordPress 4.0 for a while now.