It’s about time for my WakeMate review. Though I was initially pleased with the device, its usefulness was soon lost in a sea of hardware failure and absent customer service, so this review is really more about my experience with the device and less about the device itself.

Once I received my WakeMate back in February, I was a bit shocked by how flimsy the overall device was. Despite the hard plastic casing depicted in the prototype image, this was nothing more than a small chipset and battery wrapped in some sort of thin rubber (see below). The average human head weighs about eight pounds, and I’m a side-sleeper, which means that I sleep with a hand under my head most of the time. Would you seriously be willing to set an eight pound weight on this soft-shelled chipset? 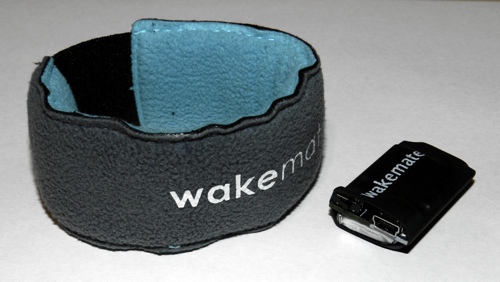 As can be expected, the device eventually failed. Its Bluetooth ceased to function one morning, rendering the device useless, as it is merely a sensor and all operations are controlled by the mobile phone app. So, here’s where things get interesting.

On June 13, I contacted WakeMate support to report the defective device. I had to delay the report due to travel, but since a one year warranty is provided, I figured that there would be no harm in waiting. I was contacted almost a month later and asked to ship the defective device back at my cost. I shipped it on July 26, and it arrived (and was signed for) three days later. What followed was incredibly long silence for what should have been a simple return and replacement.

I’m a patient guy, so I waited almost two months later before asking, “When will you be sending my replacement?” on September 19. What I received was a one-liner that just shocked me, “Please send me your address and phone type and I’ll send you a unit.” Really? So, not only am I left to assume that my return went into a black hole (because there was no acknowledgement, that was literally it), but it sure sounds like anyone could claim a lost return and receive a free WakeMate.

Well, after another long delay, I received my replacement WakeMate on October 11. Yes, it took almost four months (June 13 to October 11) to receive a replacement WakeMate. Imagine my frustration when it exhibited the same lack of Bluetooth connectivity out of the box. Note that I have several iOS-equipped devices here and tested with all before coming to this conclusion.

As can be expected, I immediately sent an email requesting a working replacement (before I ship this back at my cost) or a straight refund, and re-sent the same request again on October 27. I still have not heard back, and I doubt I ever will. Their live help is always “away” despite listed hours of “9am-7pm (PST) M-F,” their blog has been offline for three weeks, and their Twitter feed has been dormant for over a month.

Would I recommend WakeMate? Absolutely not. In concept, the device is great, but poor durability and absent custom service is not something that I expect from a $60 purchase. If you really want to track your sleep, I recommend a Fitbit, though it doesn’t have any functionality to wake you at the optimal moment. The Zeo Mobile also looks interesting (and offers the same optimal wake feature), but I haven’t had a chance to try it yet.

Update: It’s November 26th and the WakeMate blog is still offline, but this appeared on their Twitter feed four days ago:

I have sent yet another email as directed and it sounds like I may be getting another replacement. I’ll update this if and when it arrives.

Update 2: It’s December 23rd, the WakeMate blog is still offline, and there has been no activity on their Twitter feed since the date of the Tweet above, November 22nd to be exact. I contacted Arun, as directed in the Tweet, on November 23rd and was asked to submit my address for a replacement. I did as instructed, and have not received my replacement WakeMate, nor have I received a reply since.

Update 3: It’s January 26th, I have received my replacement WakeMate, and it is functioning properly. The WakeMate blog is back online, but there are no new posts. Their Twitter feed is sort of active again too, though there have been no new tweets since December.

Update 4: (You might as well skip over this and read Update 5 below.) It’s June 27, and I have just received a typo-filled Newsletter from WakeMate advertising a new product, the MiLifePlus. Oh, but it doesn’t stop there. The WakeMate site and app have now been shutdown, effectively bricking all WakeMates, presumably in favor of this new device which isn’t even in production yet. Even better, this Greg person, who used WakeMate’s mailing list to send the MiLifePlus and is currently using the @wakemate Twitter account, claims to no longer work for WakeMate and that the MiLifePlus is under an entirely separate company. If so, why does he have access to the mailing list and Twitter account, and why did the WakeMate shutdown coincide with the MiLifePlus announcement?

I may write a full post on my thoughts later, but for now, my interpretation of current events is, “If you bought a WakeMate from us, screw you, it’s broken. Invest in our new product.” As you can imagine, they won’t be getting anything from me.

Update 5: It’s still June 27, but this whole mess has been fascinating to watch. It’s all detailed in this blog post from Arun Gupta. Basically, Greg Nemeth left WakeMate, took the mailing list with him, then (illegally?) used that and the Twitter account he hijacked from WakeMate to promote his new product. It is true that the WakeMate is discontinued and that Greg Nemeth no longer works for WakeMate, but the MiLifePlus is not the official successor to the WakeMate, the WakeMate website is back online (the domain had expired, oops), and the app is working again (as is my WakeMate).

In short, don’t trust MiLifePlus or Greg Nemeth’s shady (illegal?) business practices. As for the future of WakeMate, their plan is to keep the service running while they open source the technology.