There have been many adaptations of the Hulk, but only one really stands out as truly incredible, perhaps even giving the comic itself a run for its money. No, I’m not talking about the recent movie, the one before that, or even the animated series. I’m talking about The Incredible Hulk, a 5-season TV series running from 1977 to 1982, staring Bill Bixby as Dr. David Banner and Lou Ferrigno as the Hulk.

The treatment for the series itself is really impressive considering the source material. Rather than a simple Gamma-related accident, the birth of the Hulk was more or less intentional. Dr. Banner (Bixby) was attempting to find a way to unlock that extra bit of strength that we can all draw upon in our time of need. The result of the experiment was the Hulk (Ferrigno), a large green creature that he morphs into when angered. Rather than the classic monster format that most adaptations follow, The Incredible Hulk follows a Dr. Jekyll and Mr. Hyde approach with the focus mainly on Dr. Banner and his curse rather than the creature itself. Each episode follow’s Dr. Banner’s attempt to live a happy and content life in a new city with a new job, but tragedy and general human malice follows wherever he goes, often resulting in the creature’s release. With his new lives often left in shambles by the creature, Dr. Banner moves on in his never-ending quest to find lasting happiness.

In a major departure from the comics, the creature itself is often portrayed as being not much stronger than an average body builder and is visibly just Ferrigno covered in green body paint. While this may sound silly at first, it really lends itself to being the most believable treatment of the creature to date. The Hulk rarely faces any sort of super-villain. More often than not, the creature is used to simply escape typically inescapable situations, like cages or being buried alive, or to fend off more than one common criminal. 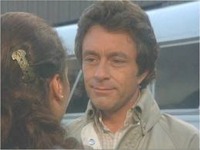 Probably the key to the success of the series is Bixby himself. He brings such a genuine kindness to every role he portrays, and this role is no different. His portrayal of Dr. Banner as a genuinely kind man who is haunted by a violent creature that he can’t control really builds a solid foundation for the dramatic integrity of the series. It’s hard to describe, but you really can’t help but be drawn to Dr. Banner in the series, and you’ll find it easy to put your support behind him and his quest to cage the beast within and live a normal life.

The final ingredient in the success of the series is the brilliant score by Joe Harnell. Simply put, it outperforms any score of the other TV series at the time. Not only is the score within each episode simply magical, but the appropriately named Lonely Man Theme closes each episode as Dr. Banner walks off into the distance, and is probably one of the most recognizable piano themes out there. Some of Harnell’s best selections from the series can be found on The Film Music of Joe Harnell, available from iTunes and Amazon.

The entire series is available on Netflix‘s streaming service, so I highly recommend checking it out if you’re a subscriber. I guarantee you’ll be hocked by the pilot episode. Now, I’d like to leave you with this awesome montage of each closing scene, accompanied by Harnell’s Lonely Man Theme.

3 responses to “The Incredible TV Hulk”