Back in the dark ages of the internet, space was limited, uploading large photos took hours, and gallery management was still in its infancy. Back then, I only uploaded small versions of my photos to the blog here and kept my originals on Apple’s convenient MobileMe gallery, but MobileMe is going for the long walk, space is not as limited as it was, broadband is awesome, and so are WordPress.com galleries, so I figured it was time to put everything in one place.

With that said, I have re-uploaded significantly larger photos to all of my galleries, from Alaska in 2002 to Vienna in 2011. Of course, these still aren’t the originals, that would still take countless hours, but at least you won’t have to squint to see them. 😉

I managed to get a whole Friday off last week and was lucky enough to spend most of the day on Bad Company 2 with the rest of the crew from Bravo 2 Company. The whole day was just pure fun, and there were many moments like the following, but sadly I haven’t quite figured out how to record my own gameplay yet.

To set the stage, I was driving my jeep (red) to capture a flag when I collided with an enemy jeep (green). Hilarity quickly ensued, and poor DrunkinDunkin (playing for the other side, as always) was laughing so hard that he couldn’t even hit me with an RPG. I aim to please. 🙂

I’m sure you’ve all seen this by now, but Trippy Sheep is trippy. ‘Nuff said.

Ten years ago, I was reintroduced to the joys of first person shooter games by Halo: Combat Evolved. At the time, the game was revolutionary in its graphics, concept, and overall scope, but it sure looks rather dated compared to today’s offerings, like Halo: Reach.

Well, fans of the Halo franchise received some unexpected news today by way of the E3 expo. After ten years, Halo: Combat Evolved is being completely remastered. Though the game is receiving a complete visual refresh, the developers have promised that it will play and feel exactly the same as the original, and nostalgic gamers will be able to switch between the original and remastered graphics at the push of a button.

Oh yeah, there’s some news about Halo 4 too, but I’m obviously more excited about the remastered first game. Wouldn’t you be?

Never underestimate the value of a good blade. 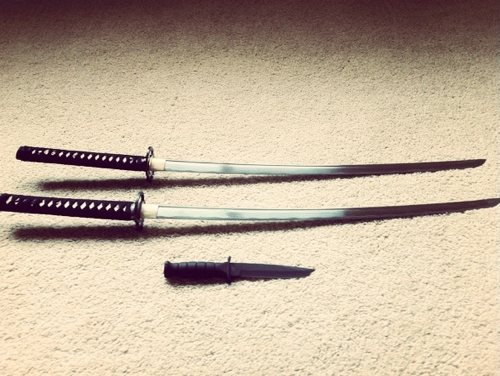